The Death and Transfiguration Scam 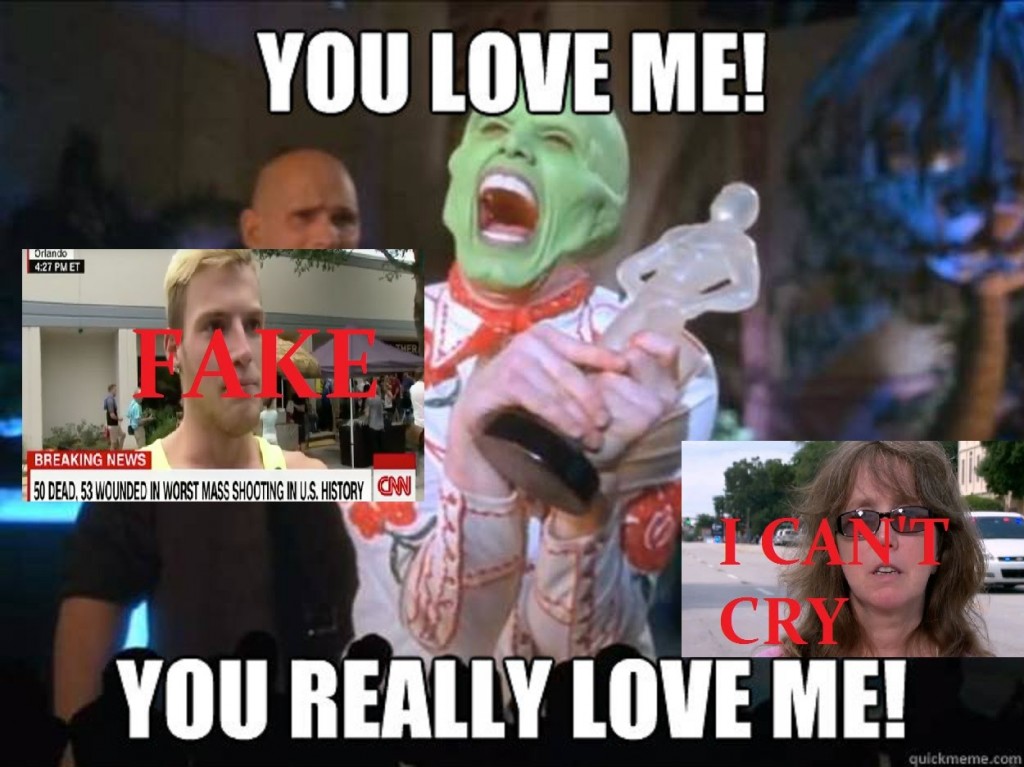 I have yet to see a competent story written by a reputable observer indicating the so-called gay massacre in Orlando was in any way a real event. It follows without saying that public perception of this unending series of choreographed terrorist events no longer accepts these smelly melodramas as authentic threats to public safety. The structural similarity of this string of manufactured catastrophes reveals them as complicated fabrications for which far too many public officials have lied through their teeth about what was actually happening.

First, as with 9/11, so many of these engineered public spectacles of death and transfiguration have followed the same formula. They’re holding a drill — 7/7 in London, Boston Marathon, FEMA in NYC 9/10 — and at the last minute the gig becomes real, and the cops manufacture a scenario that covers up their planted provocateurs and frames some predesignated patsy, who is supposedly killed as the cops miraculously burst in and save the day.

These echoes continue to resonate from Brussels and Paris to Oklahoma City and Bali among places that have felt the pain of a senseless bombing, which at first seem like random events done by frustrated terrorists, but with the passing of time become secretive plots by intelligence agencies following the demonic rules of the Jewish destabilization template.

Essential to the completion of this scam are criminally complicit media, who regurgitate the implanted terror myths in our minds as they endlessly praise the tireless efforts of our law enforcement heroes, who these days are mostly involved with manipulating low IQ adolescents into attempting senseless acts of violence and claiming these events as triumphs of their professionalism while solving the crimes that they themselves have created.

This is the al-Qaeda theory of world politics, that our designated enemy is hired from amongst the world’s disaffected young people, paid substantially well to become terror crisis actors in scenes filmed in Las Vegas for faux beheading propaganda films, and used generally in violent destabilization exercises that gain some substantial advantage for Israel and the worldwide Jewish terror apparatus. Hey, it’s the Mossad motto! By deception shall we do war. No surprise to anyone anymore.

It’s over a hundred years now, and the American people still have not picked up on that, due mainly to the power of the media, filtered into schools and churches that very Jewish philosophy — whatever we do is right and whatever the other guy does is wrong . . .

. . . because only we can possibly be right, so let’s kill those who disagree with us. Let’s claim they’re ‘less than human’. This is the new American direction crafted right out of the bloody pages of the Talmud.

Please, I’ve had enough of this throat-gagging political theater, forever trying to convince us to give up our guns.

Once and for all, people! Repeat after me.

Personal ownership of firearms is the one fact that keeps America relatively free, and most importantly free from the unlawful laws of foreign criminals who have taken over the government and, frankly, mean to exterminate us.

Threats of using our firearms have produced no response from the forces of tyranny, except to constantly introduce new laws that diminish our ability to protect ourselves. Thomas Jefferson said it long ago that to prove our point it probably will be necessary to shed blood, because our adversaries for more than two thousand years have proved they cannot be reasoned with, and will persist in their criminal parasitic activities that have destroyed every nation which has fallen prey to their tantalizing and addictive dramas since the dawn of time.

The American people need to remember its so-called government consider them and you and me its enemies. The American people should consider first before anything else that its own government is their greatest enemy because it has — and wields capriciously and maliciously — the power to destroy you for reasons that do not have to be true.

If reputable, forthright citizens with no goal other than to make the machinery of civilization run more smoothly and beneficially for everyone, cannot manage to run the world in a decent fashion, then we have no hope of anything, and the animals among us will continue to clamber to the top and abuse the rest of us.

We allow those whom we are not allowed to talk about to run our lives, and to also allow us to maintain our own perceptions of what the world is all about, as long as our conclusions don’t complicate the fictional scenario they have created for us as their slaves.

Despite the reverberations that have spread throughout the country as a result of the mainstream acceptance of the original mass murder story, the country has extended carte blanche acceptance of the LGBT community, coding what some health experts say is a mental illness into an intrinsic part of our collective personality recognized by the public as acceptable behavior.

Like the proscriptions of talking about the Holocaust in some European countries, publicly disagreeing that transgenderism or homosexuality are not mental illnesses can get you heavily fined or thrown in jail for blaspheming political correctness, which more and more begins to sound like a regimentation of mind approved by the government, which is run by people who are trying to kill us.

Death and transfiguration scam: Government creates disaster, but then it rescues us from it, becoming heroes in the media. This is what happened to all those creeps who were in charge on 9/11, the greatest military failure in U.S. history — and they all got promoted, went on to distinguished careers in industry feeding the war machine as it machineguns the whole world on behalf of its Israeli masters.

Down at the mall, there aren’t too many people who understand what I’m saying, which is . . . our government will never protect us from itself. We must do that ourselves, no matter what the cost.

The same thing happened to the Indians, who were then mostly exterminated. The same thing is happening to us. Our government has forced us not to trust it.

“What does it matter if the product comes from Israel?” the people ask innocently. And they look up at you wondering what you’re talking about.