Trapped in a Poison Fog

How Jewish media’s false stories
turn everyone into senseless slaves 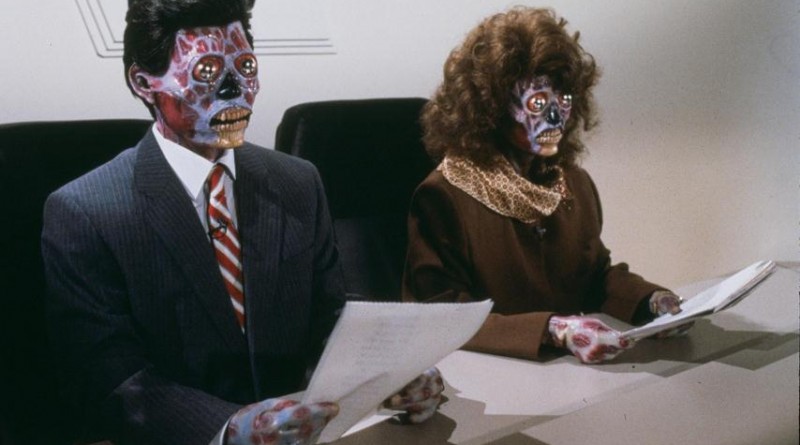 The world is in the trouble it’s in because people believe what they read in the newspapers and see on TV.

They don’t realize that the lying faces of the insincere announcers and the false invective of cynical editors and writers are all financed by the same manipulators who cause all these colossal wars and produce all these overpriced poisons because there are no better ways to make astronomically large amounts of money.

Anybody who is not an idiot can realize that the world can’t afford what these psychopaths are trying to sell.

Television tells us who are are, where we’ve been and what we want. Deviation from these depictions risks scorn from our neighbors and ostracism by our peers. Disbelief earns expulsion from ordinary society, maybe worse. We don’t realize it, because we’re having too much fun, but TV turns us into good slaves.

I ran into a relative I had never met before and eventually I began telling her about my books. When I mentioned that Osama bin Laden had been dead for a decade and his body was kept in cold storage in preparation for when his “capture” would be politically useful, her eyes got really wide.

Then I told her about the three Israelis who went on TV and admitted they were sent to New York to “document” the 9/11 event. At that point I thought she was going to call the cops on me. Like so many others, her mind was trapped in the headlines that the world has accepted as fact but never were close to being true.

In fact, although most people sense something is “wrong” with the story, the vast majority of Americans still believes that Muslim terrorists were responsible for the events of 9/11, thanks precisely because mainstream media and cowardly politicians everywhere keep hammering home the same false story.

You must know it has always been this way. History has always been a conglomeration written by the spinmeisters, “getting over” on a gullible public that pretty much believes whatever they’re told.

We trust the world we live in. How else could it be? We trust our parents. From them we learn the world. Initially we trust our playgrounds, our games, our heroes. These are practice sessions for our future lives. We leave the false games behind us, and the valid lessons that we keep later shape our lives.

And the bigger question is this: Is what WE learn correct? When we get old enough to question the sources of the information on which we base our lives, we quickly learn it is mostly INcorrect. Someone has put it there to deceive us in order to control us.

In other words, reality is impossible to see when you rely on newspapers to tell you how it is.

Which is why, in all instances, it is so important, so crucial to our freedom, not to trust them, especially in this era of false flag, government contrived atrocities.

Today, staged atrocities to reinforce totalitarian political goals are the dominant media paradigm. How many more fake shootings is it going to take to make us realize this?

Sure, many memes of information are beneficial to us, like the growing awareness that sugar, which we crave, shortens our lives and ruins our health.

But spending billions on bombing deserts rats that we have been deliberately trying to miss? Makes it hard to imagine what somebody would have to do to get charged with treason nowadays, when all the major politicians are committing treason every day and getting fabulously rich because of it.

We must remember that the description of the world scenario our parents painted for us is largely mythological. History did not come down the way they said it did. Every day there is another revelation that proves this point.

Most people still don’t get the memos, or comprehend the true picture. They’re too busy with their mundane lives to devote their leisure time to verifying what the world tells them, what they learn from their peers, neighbors and acquaintances. They generally accept what is presented to them, and move on. For most, life is not rocket science. And this attitude is what shortens the lives and damages the quality of those lives for the vast majority of people on this planet.

But a study of how this false history gets inculcated into the minds of its victims clearly shows that the people committing crimes on a scale grander than most people can imagine are the very shysters providing the information that leads people in the wrong direction, that mobilizes them for wars that don’t need to be fought, and convinces them to consume products and eat foods that are very, very bad for them.

As a result, throughout history, humanity has been lost in this poison fog that reaps riches for the clever few and heaps misery on the manipulated majority.

These lies leave permanent scars on the world, and create people who don’t even know where they are, what they want, or how much they harm everything, including themselves and the ones they love.

We Americans are going through such an injury now, when the Russians have exposed our lies over the bombing of Syria. Coming on the heels of 15 years of deception since the 9/11 caper, even the dumbest Americans can see all these media stories trumpeting the alleged need of the United States to conduct all these overseas invasions are nothing but more of the hot air fueling the poison fog that keeps Americans in the dark about what the lunatics who have taken control of the country are actually doing.

And the really dangerous thing is that those morons who believe the tripe in the big newspapers or the self-serving fantasies on the Jewish networks are more than likely to call the cops on us when we tell them that Jews control the White House or that Osama bin Laden was really a CIA flunky who worked for Zbigniew Brzezinski when he was going by the name of Tim Osman.

When they hear us say the truths we have learned, redneck cops trained in Israel are likely to taze us and drag us off to the local infirmary for a shot of Thorazine, and bang! there goes our brain. This is a likely scenario as more and more Americans simply refuse to be enlightened and don’t have the courage to challenge the lies that are being crammed down their throats by paid off sluts in uniform who don’t really care whose lives they ruin of people who are only trying to tell the truth.

Those clued in to the 9/11 deception have become aware that the lies we were told about that fateful day really extend back throughout the 20th century. Both World Wars never needed to be fought, but the need for them was hammered into the minds of Americans by these poison media that cleverly champion the moneymaking crimes conducted by the real power brokers who pick the presidents and determine who will live and who will die.

These same media promote their hollow spokespeople and suppress the histories of such genuine American heroes as Henry Ford, Charles Lindbergh and Joe McCarthy, who tried to warn us about the insidious Jewish menace that — a hundred years ago! — wrapped its toxic tentacles around the essential mechanisms of the American government and ever since has been strangling the world to death with its false representations.

Thanks to the suppression of the warnings these men tried to give us by a poison media that keeps us all in a disorienting fog, the Jews have largely succeeded in turning the country and the world into their own profitable abattoir, while the mass of the population continues to live their lives in a pathetic state of unconsciousness, and the small minority who does see the century-old deception flounders around in a frustrating search for a solution to this lethal Jewish trick that has been played upon the world.

Nothing was more absurd or erroneous than descriptions of the recent invasion of Ukraine by Western mercenaries that was passed off as an invasion by Russia in the Western press. All the lackey American allies quickly lined up behind the false story, and for a few weeks the world teetered on the brink of World War 3 all because of the lie the Jewish media had forced into the minds of people around the world.

The key piece missing from the mainstream narrative is that Jews are invisible, that Jewish influence is never factored into discussions, particularly of a political nature, but also in all the other categories, be it schools, medicine, the law and law enforcement . . . whatever the category, the Jewish factor in all of them is omitted, or at least downplayed, for the very simple reason that Jews control the worldwide media, at very close to one hundred percent, so that news of their undeniable desire to control the entire world is never mentioned in virtually all mainstream news stories.

As a result, humanity is suffocating, not from lack of oxygen, but from lack of objective truth. Humanity is being suffocated by the Jews, who wish all non Jews to be semiconscious slaves purposed only do the insane pathological bidding of this one conscienceless group that essentially hates life, hates the fate it has chosen for itself, and is intent on making everyone else feel as bad about life as they do.

And this is the poison fog that Jews spread throughout the world through their terrifying control of all communicative media. These are toxic enterprises that turn good into evil and evil into good, and seek to diminish the awareness of human beings down to their own level, playing rigged games in a fetid darkness in which only monsters may thrive.